The town of B 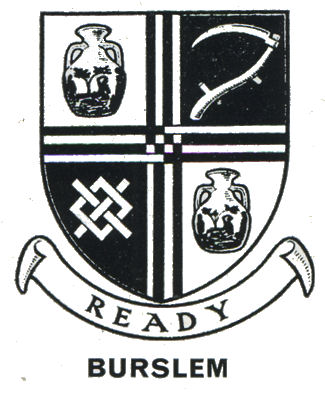 urslem, ‘mother town’ of the Potteries and one of the 6 towns of the city of Stoke-on-Trent has the motto ‘Ready’ engrained on its coat of arms.

Burslem’s fortunes over recent centuries exemplifies the strengths and challenges of manufacturing areas across the UK. Having driven the industrial revolution and benefited from the prosperity and local pride and municipal investment that resulted, Burslem was not prepared for the aftermath of globalisation from the 1980s onwards and the rising unemployment, degradation and abandonment that resulted.

Despite this, however, fierce local pride has ensured that a number of committed individuals, groups, businesses and elected representatives have kept their faith in their determination that Burslem would reinvent itself for the future as a place of quality for people to live , work and visit.

The role of the Burslem Regeneration Trust, with a strap line of ‘Transforming Burslem’, is to bring together each and every interest group in Burslem to create a shared vision and to facilitate the delivery of a long term strategy.

Burslem lost a significant amount of jobs following decisions by leading businesses to outsource manufacturing production. This globalisation was not unique to Burslem, but the viability of the town was severely undermined. Cumulative effects of job losses, impact on the supply chain and wider implications for local traders in the town led to economic decline with social consequences and an apparent void in strategic policy making.

In an attempt to counter this decline, various groups set about revitalising the town centre with mixed measures of success at the end of the Twentieth Century. These included the still thriving Burslem School of Art, the Burslem Community Development Trust, and the Ceramica Trust.

From these initiatives came the initial renovation of the iconic Burslem School of Art building (previously in disrepair) and the use of Millennium Lottery Funding to convert the Old Town Hall into a centre to celebrate the history of ceramics. The ensuing grant was conditional upon the construction of a new building to commemorate the new century. Unfortunately public opinion against the controversial design of this new building was so strong that ‘Ceramica’ as it became known, was never given a chance and condemned often by people who had never even visited the attraction, believing it (wrongly) to have been simply an eyesore.

The lowest point in Burslem’s decline was perhaps the closure of the Royal Doulton Nile Street factory with no meaningful consultation about the impact this would have on the wellbeing of the town, its workforce and residents. Efforts by the then MP led to a government task force to consider what Government and European support there could be for those who lost their jobs,  and what could be done to start to reverse the fortunes of the town centre. By this time trade was drastically reduced, and Burslem had effectively lost its role as a local shopping centre.

Meanwhile as footfall into the town floundered and perceptions of Burslem as a ‘ghost town’ grew, communicating to local people the fact that a longer term approach was finally underway  was difficult in an environment where ‘seeing by believing’ would be the only mark of success . The ‘seeing’ was always going to take time and need a step by step approach regardless of the clamour for instant results.

Just about all of the town’s once proud buildings and institutions came under the spotlight as proof that Burslem wasn't working. The Victorian heritage Burslem Park had become a place renowned only for anti-social behaviour. So it was critical that when determined local volunteers insisted that something be done, positive partnership working secured Heritage Lottery Funding for the full scale renewal of the Park. The reopening of Burslem Park in 2013, with a re-enactment of the original opening of the Park (a parade of townspeople and all involved from Swan Bank to the refurbished park and a day of events) was proof that Burslem was reversing its fortunes.

Another issue which had come to symbolise the extent of Burslem’s declining fortunes was the neglect and finally abandonment of the indoor market. This was made worse by the protracted legal battles between Stoke on Trent City Council and Port Vale Football Club over its successful outdoor market. As well as providing evidence of a successful trading area in Burslem, the Port Vale outdoor market brought in much needed income into the Club. The decision to take enforcement action against Port Vale’s market and to introduce a council run market did not achieve the desired outcome for the town in respect of increased footfall and trade. Moreover the loss of income to the football club from the market destabilised its financial health and although this was by no means the only factor, it contributed to the financial instability which led to not one but two successive administrations for the club. The significance of a thriving League 1 Port Vale Football Club, integral to the local community, was and remains a significant factor in the future success and viability of the town

It was the closure of Royal Doulton and loss of jobs that brought things to a head. The then department of Trade and Industry via the then  Regional Development Agency,  Advantage West Midlands , responded to calls from the then MP for there to be a memorandum of understanding between SOT Council , business and community to set up a body to bring all partners together to involve stakeholders in the regeneration of Burslem.

The subsequent Burslem Regeneration Company variously chaired by Ed Yorke, Hugh Edwards and Joan Walley agreed a remit to make Burslem a place of quality for people to live, work and visit. Various funding packages were secured, ranging from the completion of the by now unfinished Ceramica project to the securing of £millions from three successive Townscape Heritage (THI) funding packages to begin the long term task of bringing abandoned buildings in the town centre back into use.

It was recognised that only a step by step approach could work and that the first priority was to seek funding to repair and renew empty and derelict buildings in the town centre to give a new lease of life.

The Burslem Regeneration Company was instrumental in creating the context in which European (ERDF), Heritage Lottery (HLF) and match funding for renovation of a number of buildings across the town were secured. Stoke on Trent City Council provided invaluable support by backing this programme and also providing a dedicated professional and administrative support team based in Burslem.

Despite very limited resources, various newsletters were put out to explain what progress was being made to revitalise Burslem. Meanwhile the rich assortment of local groups and business continued with the efforts of their own organisations to invest in community events keeping alive the traditions of the town. The interest of The Prince of Wales and his Prince’s Charities in seeing Burslem as a positive example of ‘Place Regeneration’ from 2011 supported ongoing initiatives.

The consequential momentum contributed to many positive changes too numerous to mention, but include:

This record of relative success over recent decades is made up of many of those individuals who have worked with, and in partnership with, the team who have made up The Burslem Regeneration Company / Trust. We are now formally at the stage where The Burslem Regeneration Company set up at the initial request of government with designated support from the SOT Council has successfully adapted itself to changing circumstances and has re-established itself as a Trust to act as an umbrella multi sector group with senior and local level championing of the initiatives that continue to be needed for Burslem’s long term future.

The Stoke-on-Trent city coalition council, established after the 2015 elections, quickly developed a clear and positive relationship with BRT.  Elected members have supported the BRT through their positive approach to Burslem, all within the paradigm of the six towns of Stoke-on Trent engaged as a cohesive unit supporting one another.  This relationship has included a dialogue of collectively promoting the towns through a vision of optimal location (centrality between Birmingham and Manchester), excellent road and rail links, along with exceptionally attractive land and property prices.

The question for The Burslem Regeneration Trust now is how to maintain the momentum that has been created in the Town, and to re-establish its vision and objectives for the long term and the period 2016-2020.